Mrs. H isn’t feeling too well… Here is another story on the importance of safe renovations 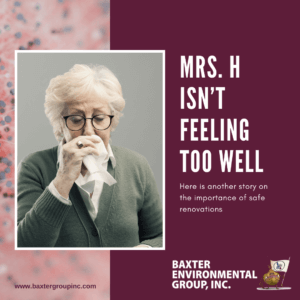 The early 21st century home was in immaculate shape, nothing seemed wrong from the looks of it as I walked up to the front door and knocked on it. I was greeted by Mr. H and he explained to me that Mrs. H hasn’t been feeling the best. I asked if she was doing anything out of the ordinary. He replied with no, she works from her new home office which is next to the newly remodeled and installed bathroom.

We proceeded to the basement where the remodel had taken place and as I walked down the hallway I started to smell a musty odor as we got closer to the bathroom and office. As we went into the bathroom the odor got worse and I asked if it has always smelled like that, he replied with no and we started investigating.

The ceiling was made up of a grid with 2×4 ceiling tiles and one had a vent to vent out moisture. As I pulled up one of the tiles I felt it was really soft and somewhat mushy on the corners, I was told it was completely out of the track and it was covered with mold on the other side. I peeked my head through the rest of the drop ceiling and 75% of the ceiling tiles in the bathroom and the adjacent office were covered in mold, along with the top 12-16 inches for the backside of the drywall that separated the two rooms. He asked me why this happened, I replied with a lack of ventilation and moisture building on the tile. He said that they use the exhaust fan every time they shower and he didn’t understand why it would build up if the fan is on.

After further investigation, we found out the duct the fan was connected to wasn’t coupled correctly causing a leak which is pushing hot moisture-filled air out of the bathroom and above the drop ceiling causing the issue.

What I take away from this experience, and what I want you to take away from this story, is to never underestimate the unseen. There are so many things behind walls and under floors and tiles that it is not always easily apparent when there is an issue.

If you suspect that something is causing sickness, it is worth it to allow us to assess your situation thoroughly and use our experience to remediate the area and protect your family once and for all.

5 Tips To Safely Renovating A Damp Or Wet Basement

5 Tips To Safely Renovating A Damp Or Wet Basement
Get a FREE estimate! Contact Us Now